I’ve not wrote a post for a while and this is something I feel I need to rant about. Adobe have taken quite a bit of stick over recent years from the web design community. With many people moving from Photoshop to apps like Sketch. Citing lack of innovation as their primary reason for leaving. I know Adobe have since hit back with XD which I happen to prefer to Sketch but I know for many its too little too late. I’ve actually defended Adobe as for the most part I really like their software and I do think they innovate. The creative industry has a lot to thank Adobe for in my opinion.

I digress, back to my rant. I don’t really follow Photoshop development news so I was really pleased to see the update to all CC products last month, October 2017. I eagerly updated Photoshop and fired it up hoping to finally see proper UI scaling in Windows. My hopes were quickly dashed when I opened up the preferences to see the same old settings. WTF Adobe! This has now become really annoying. I have a 3440 x 1440 monitor and I can’t really work properly in Photoshop. The 100% scale just looks tiny and the 200% looks huge with half the UI is missing. 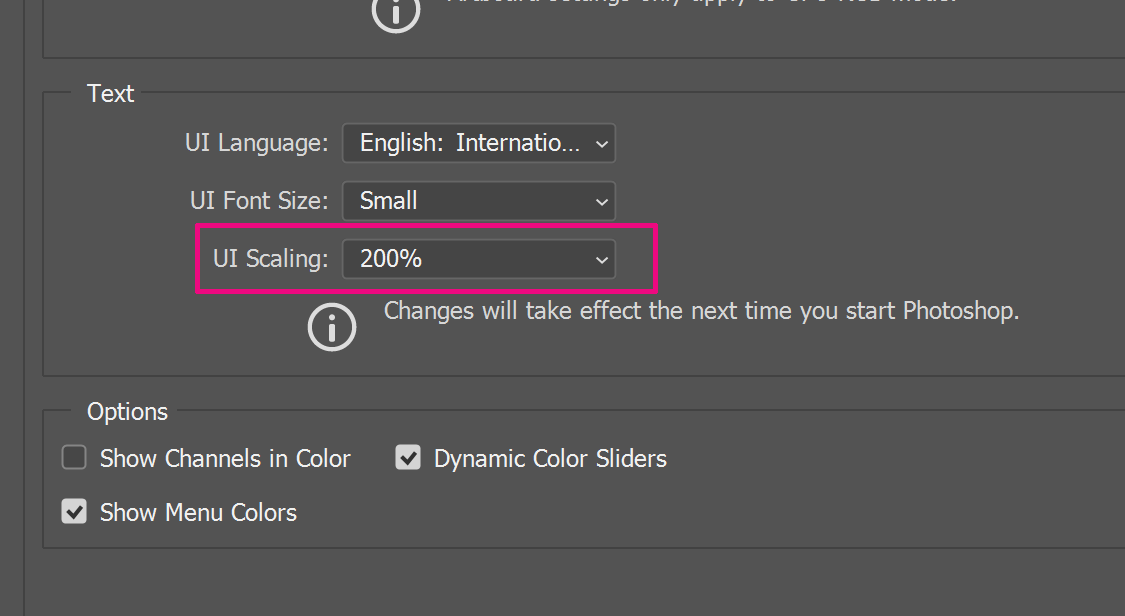 I can’t believe Adobe still haven’t addressed this issue. Having done a little bit of research all they have to say is that the team is looking into it, which several years down the road is simply not good enough in my book. The Adobe suite costs me just under £50 per month and Photoshop is the app I use the most by some margin. Paying approximately £600 a year for something that doesn’t work properly is annoying to say the least. In any other area of life with any other product this just wouldn’t happen. Come on Adobe get your finger out and make this happen, sooner rather than later before you loose even more customers!

By the way I should point out that this post refers to the Windows version. I’ve not used the Mac version for a while so I’m not sure if this problem exists on the Mac. Adobe have updated all of their other main apps so why leave their crown jewel in this state? Any way I’ll leave it there for now. If you have any comments regarding this situation I’d love to hear them, please leave your thoughts below.

Adobe, Adobe, Adobe!!!!! what the f*ck are you doing?? I’ve just downloaded the latest version of Photoshop as of the 5th February 2018. Looking at the patch notes Adobe are saying that UI scaling has now been fixed. I excitedly fired up Photoshop eager to finally have proper UI scaling. I should have known not to get my hopes up. Yes I’m sorry to report that Adobe have still not implemented proper UI scaling. The official line from Adobe is that Photoshop now scales in conjunction with Windows 10 display settings. This is only the case if you are running Windows 10 Creators Update or newer. This is true, the UI in Photoshop does indeed now scale in conjunction with the setting in Windows but this is not a satisfactory solution! For me to get the UI scaling I want in Photoshop I am having to run a Windows scaling setting of 175%. This does look OK in Photoshop but everything else is now way too large!

I just can’t believe this. After weeks of waiting this is all we get! Why Adobe can’t just implement a proper UI scale setting in Photoshop is beyond me. We should have a UI scale setting that lets one scale the Photoshop UI independently of the Windows scale setting. If we had a slider that allowed a scale to be set from 100% to 400% that would be absolutely fantastic. Failing this pipe dream even if it could just work like Illustrator and InDesign it would be massive improvement on what we have currently. In Adobe Illustrator you can just check scale for high-PPI displays and that’s it, the UI then just scales automatically to a sensible level, see the settings from Illustrator below. 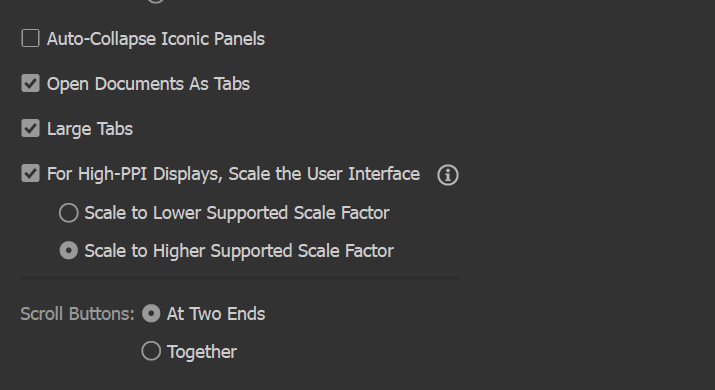 Please Adobe have another look at this and push out a proper fix. As it stands currently this is actually worse for me that the previous version and I am certainly not alone in this position. Hopefully I’ll be able to report back soon with some positive news. One day I’ll fire up Photoshop and finally see the UI scaled as it should be! One very disappointed Photoshop user / customer.

The saga continues. In my new video below I discuss the issue further.